What next for the UK? 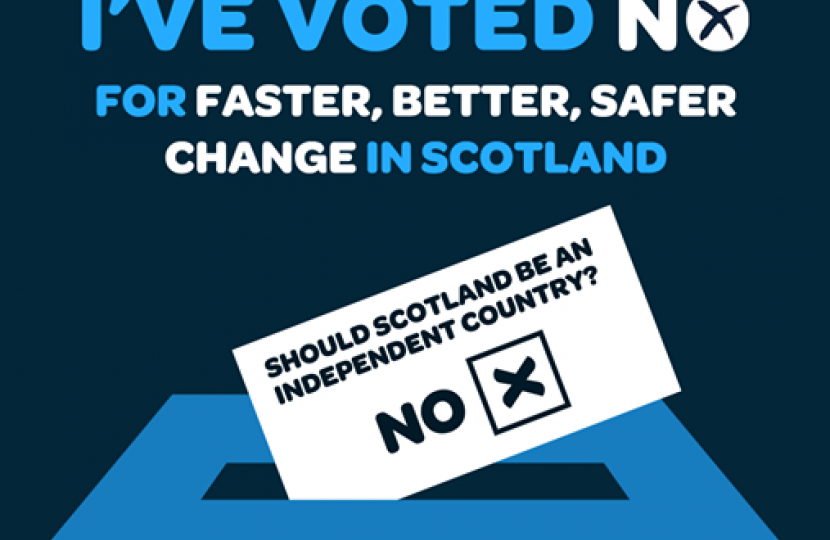 The following is the opinion of the individual contributor and may not reflect the views of the North Thanet Conservative Association or the Conservative Party.

Like millions of others across the United Kingdom I was delighted to wake up this morning to find that my country was, in the words of the great hymn by Gustav Holst, entire and whole and perfect. The polls are closed, the votes have been counted and it's official that Scotland will be remaining a part of the United Kingdom for the foreseeable future, but naturally that doesn't mean that the status quo is now the order of the day.

It is, in my opinion, intensely regrettable that in the days before the referendum the Prime Minister and the leaders of the other two parties rushed to make promises to Scottish voters that were never cleared with their own parties at Westminster, leading to the possibility of acute embarrassment if it transpires that these measures can't actually be delivered. In particular it's almost unthinkable in the light of the recent upheaval in the Union that the Barnett Formula can be allowed to continue in perpetuity; even Lord Barnett agrees that it's a disgrace and grossly unfair on those in England who payroll a system which knowingly puts them at a disadvantage. If Scotland's Parliament is going to gain tax raising and varying powers and control over an increased number of competences then it's only right and fair that Scotland should have full responsibility over funding the services that they decide that they require. I don't think that's a controversial statement but rather an expression of common sense that I'm sure many in Scotland would agree with.

This does of course throw up the broader issue of devolution in the post-referendum world, and that does of course have to be a two way street. Scotland, Wales and Northern Ireland have enjoyed devolved parliaments in one form or another for a number of years and it's fair to say that this has been a relatively successful exercise, and it's equally fair to say that as Scotland gets a new deal so Northern Ireland and Wales will rightfully expect increased powers too. This leaves the question of England, the nation with a population over five times that of the other three constituent countries of the United Kingdom combined.

When devolution was all the rage under Tony Blair an attempt was made to tackle this issue by creating regional assemblies, on the basis that an English Parliament would be far too large and powerful to be contemplated. Listening to many of the "Yes" voters in Scotland recently one of the key issues raised was that they didn't feel that the parliament in Westminster represented them, and this would be exactly the issue with regional assemblies. Administrative divisions should, by any reasoned logic at all, follow cultural boundaries so that when people look at their administrators they see reflected there something that represents the way that they view themselves. The Scottish Parliament is a popular concept in Scotland because when someone Scottish looks at it they see something that reaffirms their own world view- a Scottish person in Scotland with a Scottish Parliament; administrative boundaries mirroring the cultural perception of the population, perfect.

The trouble with English regions is that no one English identifies with them; they're an arbitrary line drawn on a map, probably by some long-retired civil servant, which have no bearing on what actually exists in reality. When you cross the border from Scotland into England there is something subtly different; you pass a vast "England" sign, the people talk slightly differently, they have slightly different traditions, they're waving a different flag, and you know that you've crossed into somewhere different than where you were before. Meanwhile when you pass from the region of East of England into the region of the East Midlands there's no difference at all, because it's a completely arbitrary division that doesn't exist anywhere except in the minds of whoever dreamt it up. So why would I, living as I do in Kent, want a South East Assembly representing me? Am I South East-ish? Do I have something in common with those in the South East Region that is lacking in those foreigners from London or the South West? Is there a shared culture and history that people in the South East have that sets us apart from those irredeemably alien folk in Yorkshire & the Humber? No, clearly none of that is true, there's very little that people in the South East or any other region have in common that they don't also have in common with the rest of England, so no one is ever going to be enthralled by a regional assembly that's based on a distinction that doesn’t actually exist.

On that basis, and however painful and difficult it might be to begin with, an English Parliament is the only way forward for devolution in England. I don't just mean asking the MPs from the rest of the UK if they wouldn't mind popping out of the House of Commons for a few moments while the English MPs vote on an England-only issue, I mean a fully-fledged English Parliament entirely separate from the UK central administration with all the trappings and powers of the Scottish Parliament or Northern Ireland Assembly. Sir Roger Gale, MP for North Thanet, said in a recent press release that he personally favours the abolition of the House of Lords and House of Commons and their replacement with four national parliaments and a UK-wide senate to deal with foreign policy and defence. An incredibly bold and brave statement, but one which I concur with entirely. A federalised United Kingdom would allow all four constituent nations to feel that they were properly represented while maintaining a Union which is of benefit to all of us and to the wider world. It’s a perfect solution to the inherent inequalities of the present system and should act as a pressure valve to release nationalist sentiment which will continue to threaten the future existence of the Union.

In dangerous times where all around us hatred and division are on the rise, whether it be in Ukraine, Syria, Iraq, Nigeria or elsewhere, the United Kingdom taught the world an important lesson in unity last night. Those things which make the British people the same are far stronger than those which make us different, and I firmly believe that together we can and will face down the threat the likes of ISIS pose to the freedom and safety of our world just as we've faced down countless threats before. From Napoleon to Soviet tyranny, the United Kingdom always has been a bastion of liberty in an often unstable and volatile world. Sweeping and comprehensive constitutional reform now can create a fair and equal settlement for all four home nations, and most importantly of all it can ensure that three hundred years from now we'll still have the flag of the United Kingdom of Great Britain and Northern Ireland flying high in London, Edinburgh, Cardiff and Belfast.