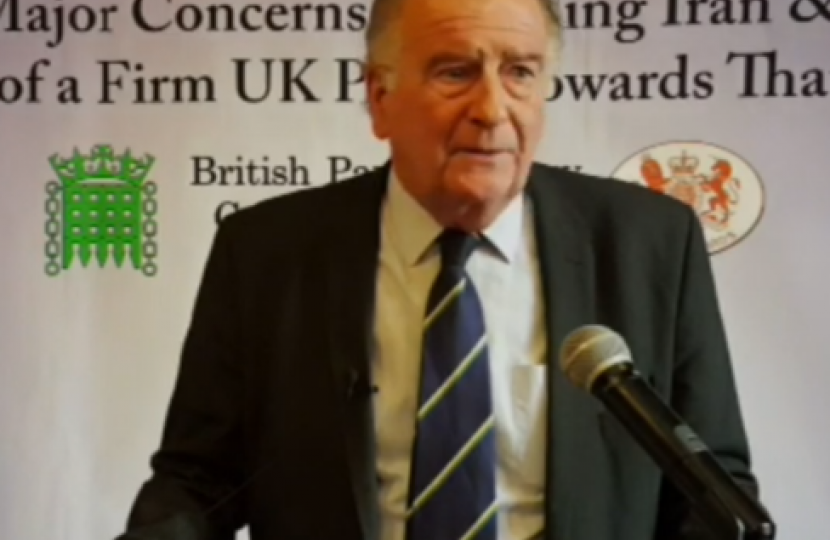 On Tuesday 15th September 2015 Sir Roger Gale, MP for North Thanet, attended a major conference organised in the House of Commons organised by the British Parliamentary Committee for Iran Freedom. The meeting, which included Peers and MPs from various parties as well as former political prisoners and members of the British Iranian community, addressed the on-going and deeply concerning human rights situation in Iran today, including the use of the death penalty and poor treatment of political opposition. It was highlighted that over two thousand executions had taken place since Hassan Rouhani took office two years ago, an increase on previous levels despite the reportedly moderate views of the Rouhani regime.

Addressing the conference the President-Elect of the National Council of Resistance of Iran, Mrs Maryam Rajavi said:

“The people of Iran must have the right to freedom from arbitrary arrests, torture and extra-judicial executions. They must have the right to enjoy personal freedoms and security and be equal to others before the law … Unfortunately, the issue of human rights and freedoms in Iran was overlooked more than ever in the past two years while the nuclear negotiations and its ultimate agreement was ongoing. We call on Britain, Europe and the International Community to stand by human rights, freedom and the Iranian Resistance and respect the Iranian people’s desire for regime change”.

In common with the rest of the Committee Sir Roger continues to be deeply concerned both by the situation within Iran itself, and also by the treatment of Iranian refugees living in Camp Liberty in Iraq. As Britain re-establishes diplomatic ties with Iran the Committee has called for a future relationship that’s based on human rights and basic freedoms.

Addressing the conference, and Iranians around the world who are seeking a better future for their country, Sir Roger Gale said:

“British MPs stand staunchly behind you and your cause of freedom in Iran”.