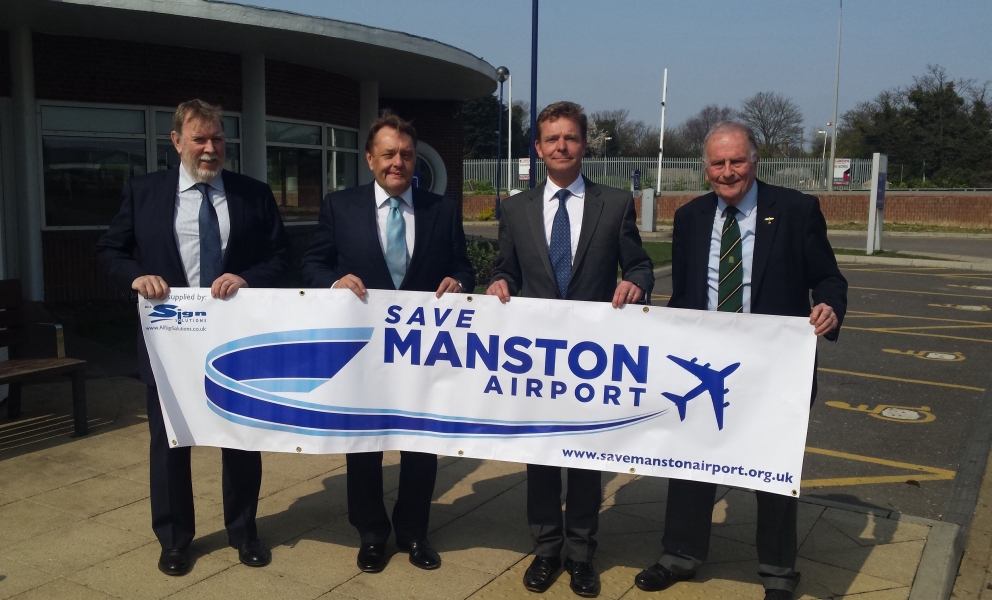 John Hayes, the Minister of State for Aviation, has today delivered a double boost to the campaign to save Manston Airport.  He has announced:

The Minister of State and Prime Minister`s Special Representative  has today announced that instead of agreeing a long-term contract for Bristow to base their helicopters elsewhere, he has agreed a one-year deal in which the helicopters are based only temporarily at Lydd Airport.  This paves the way for the helicopters to return to Manston once the airport reopens.

He is removing one of the key barriers to the compulsory purchase of Manston: One of the key stumbling blocks to Thanet District Council issuing a Compulsory Purchase Order for Manston was the perceived lack of confidence in the financial indemnities offered by RiverOak - the US firm interested in buying Manston and running it as an airport.  Following work by PWC, who were commissioned by the Government to review all the documents that have informed decisions in relation to Manston to date, the Minister has today told the Leader of Thanet District Council on the basis of the independent PWC analysis that he “is satisfied by the indemnity offered by RiverOak to protect the council against the costs of the Compulsory Purchase Order.”

John Hayes said: “I have been paying close attention to the future of Manston Airport throughout my time in the Department for Transport.  And I believe the announcements I have made today are huge steps towards securing Manston’s future as a working airport.  It is further evidence that it really is possible for Craig Mackinlay and Sir Roger Gale to deliver their five-point plan for Manston. Now, if local people want to see that plan implemented, they have to vote Conservative on May 7th - because while others may shout from the sidelines, the Conservatives have the strength to deliver.”

Craig Mackinlay said: “The good news just keeps on coming.  I have wanted to give Manston a long-term future as a working airport for a long time.  That’s why, back in 2001, I tried to launch a low-cost airline flying mainly from Manston to Malaga.  So I’ve always been committed to the place.  With the Conservative five-point plan to save Manston and the great news announced by the minister today, I am more confident than ever that we will succeed.

“The reason we are making such good progress is down to the fact that we have such a strong Conservative team, which includes Sir Roger Gale in North Thanet, important Ministers like John Hayes and the Secretary of State Patrick McLoughlin, together with a team of Conservative councillors, led by Bob Bayford.  In contrast, UKIP - who have jumped on the bandwagon with Manston as with so many other issues - don’t have the power to deliver and to date have contributed nothing to this effort whatsoever.

“The fact that Bristows, a strong commercial organisation, are prepared to demonstrate their faith in Manston and their willingness to give us time to get the airport operational again speaks volumes.  Search & Rescue will be coming home to the airfield where it belongs and this should send out a clear message, if nothing else does, that the Government means business and that there is no “Plan B”. I understand that there may be those who will say “It will all change after the election”. Those people are, quite simply, wrong. We are in this for the long haul: the nation needs Manston Airport, Kent – with or without the Leader of KCC – needs Manston Airport and Thanet needs Manston Airport and that is what we are going to have”.

And the Leader of Thanet`s Conservatives, Cllr. Bob Bayford, has said;

“I am satisfied that it is safe to proceed on the basis of the assurances given by Price Waterhouse Coopers via the Minister of State and can therefore say today, without equivocation, that a Conservative controlled council elected on May 7thwill take immediate steps to instigate the processes necessary to compulsorily purchase Manston Airport on a back-to-back deal that will enable the airport to return to full operational status as swiftly as possible. Too much time has been lost and too much uncertainty caused already and we need to get on with this” (ENDS)