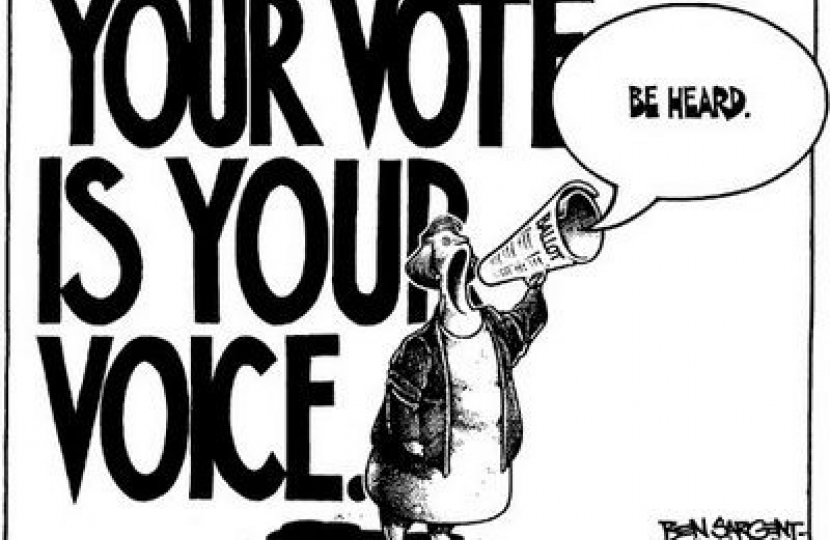 Following the recent governance debate at Canterbury city Council at which both Councillors and members of the public expressed a desire to switch from the current Executive model to a Committee system, I thought that as one of the elusive "young people" everyone apparently wants involved in local politics I'd put my thoughts on record. For those who don't know, I was elected to the Council at the age of 20 in 2011 and have served on the Executive Committee for the past 12 months, I turned 23 in March of this year.

Firstly, and I'm not sure whether this is a generational thing or a result of my own personal interest in international affairs, but I find the idea that Canterbury City Council isn't democratic both flabbergasting and frankly deeply offensive. We in this district have free and fair elections with universal suffrage for over 18s using the first past the post system, and after the election each political group has a vote on who should be their group leader, and the leader of the biggest group becomes Leader of the Council. The Leader of the Council then appoints members of the Executive Committee from those Councillors representing his party. This is almost entirely the same as the system we have at Westminster- the leader of the biggest party in the House of Commons becomes Prime Minister and appoints members of the cabinet from his party's MPs. How a system so closely resembling that of the "mother of all parliaments" can be described as inherently undemocratic is frankly baffling; I'm not suggesting the current system is perfect either locally or nationally, but we shouldn't let ourselves get carried away and should strive to keep things in perspective. In a world where every day millions of people live under tyrannous regimes and people give their lives for want of even basic rights, for people in one of the nicest cities in one of the richest and freest countries on earth to claim that something as innocuous as a local council is an undemocratic dictatorship brings to mind for me the phrase "First World Problems". I'm not saying we shouldn't always strive to improve what we have, but at the same time I'm a firm believer in keeping a global perspective and not inflating a fairly small issue into something it isn't by using disproportionate and inappropriate language.

Even the name of the campaign group "Campaign for democracy in Canterbury District" makes me cringe- I know a number of those involved and they're lovely people and highly intelligent, but I strongly disagree with the premise the name is based on. I believe that if those who are part of pro-democracy groups in the likes of Syria could hear such language used in this context they might be rightly offended that their ongoing struggle for the right to determine their own fate is being cheapened and devalued by such emotive words being attached to something so comparably insignificant.

Again I stress that I'm not saying that Canterbury City Council is perfect or beyond criticism, and the campaign group are free to carry on doing what they're doing, but I for one am grateful that at the end of a Council meeting I can go home to my safe and comfortable flat and I reserve my outrage for incidents elsewhere in the world that are far worse than anything we in this District will ever have to endure.

Having got that off my chest, I will move on to the actual topic of governance. I am not a keen advocate of the Committee system, but nor am I violently opposed to it, mainly because I don't think it's something that will make a massive amount of difference and I don't think it's something the average man in the street is particularly interested in. Certainly there are those both in the Council and in the public who care passionately about the issue, but for the vast majority of the district it probably doesn't rate very highly on the priority list. Even those who live relatively comfortable lives probably have bigger worries than local council governance. Whatever system you introduce if a party has a majority the size of the Conservatives' on the current Council they'll be able to push through their policies; in the Executive system this is done by the Executive Committee being one party, under the Committee system it would be done by that party having a majority on every committee, the end result would be near identical.

I voted in favour of the notice of motion pressing for a Committee system at the recent Council meeting, and if the recommendation from the Political Management Member Panel comes back recommending a Committee system I will probably vote for that too. Because to me the means of making the decision is far less important than the need to get the right decisions made. At the end of the day things like the Local Plan and budget cuts are never going to be popular and the majority of the public who are interested are likely to be opposed to the decision- but the extent to which a decision needs to be taken doesn't rise or fall in accordance with how palatable that decision might be. As a councillor there are always going to be decisions you don't want to make, but when it's your job to make them no matter how long you spend talking about it there does come a point where you have to bite the bullet and make a choice.

The Committee system would doubtlessly mean it would take a lot longer to make a decision (to the extent any urgent decision would probably have to be delegated to an unelected Officer) but that doesn't necessarily mean a different or better decision being made at the end of the day. The political groups on the Council will still have positions on specific issues that most members of that group will both agree with and support having spoken about it beforehand informally, and as such any party with a majority is still going to be able to vote something through no matter how many hours are spent talking about it. The only way you're going to prevent Councillors talking through upcoming decisions prior to public meetings is by springing the agenda on them out of the blue at the start of a meeting, with them having never seen it before and not having known what was to be discussed, but that'd be frankly ridiculous. On many issues presently Conservative members will uniformly vote in favour of a proposal, and Liberal Democrat members will uniformly vote against it, because in both cases Councillors are in a particular party in the first place because they have a particular world view, they know and generally trust the judgement of their own colleagues, and they will have talked it though at least in general terms previously. This isn't always the case and I don't always vote with other members of the Executive Committee or group at Council, and for many others it's the same, sometimes the debate at Council can sway people to change their mind, but generally the leadership wouldn't table an agenda item on a certain matter if they didn't think enough of their own group would support it to win a vote no matter what governance system you have. This is again very similar to what happens at Westminster- if the government didn't think enough of their MPs were going to back a motion to win the vote they'd never table the vote, and the only way to establish that is by speaking to the MPs before the issue ever reaches an agenda.

When it comes to Council meetings opposition Councillors might get applause from members of the public for saying what they think people want to hear or agreeing with whoever shouts loudest, but the fact is they're only given the freedom to do what they do by the fact they don't actually have to make any difficult decisions. The recent Local Plan debate, which I had to absent myself from the vote for due to a previously declared prejudicial interest, was a prime example. Listening to the opposition Councillors speaking was like listening to Andy from the sitcom Little Britain- they stood up and declared by various combinations of words "I don't like it". They were full of statements about where they didn't want the houses, but singularly lacking in even the slightest idea of where they did want them; full of questions to which they didn't have an answer. If they were in the majority they would have to make the decisions, and they would have to take the unpopularity that came with those decisions, because as they have amply demonstrated they don't have a clue what they'd do differently if they ever had the chance.

Essentially what I'm saying is that I don't believe that the Committee system is the marvellous and magical remedy to the perceived problem, as I don't believe it will mean radically different decisions are made. That being the case, if the recommendation comes back to Council saying we should make the switch I'll support it, because if I don't think it's going to make much difference what have I got to lose? I could be wrong on that point, but we won't know until we get there. I still think for the majority of the District this is a very marginal decision about which many people won't care even slightly, hence I haven't let myself get particularly worked up about it. I strive to always do what's best for the people who live in Canterbury District even if a decision might be painful and unpopular in the short term; and while it's nice to be able to give people good news that will make them happy to see you this can't always be the case.

I would conclude by saying that if I decide I want to stand again for election in 2015, and if the Party decides they're going to let me, and if the public elect me, I'll carry on with that one basic goal of doing what I believe to be right irrespective of what governance system we have. Many who read this may disagree with what I've said in this article, but it's often said that more young people should be involved in local politics, and what's the use in being involved if I don't say what I think?